How to Track your Success (or Failure) on Twitter 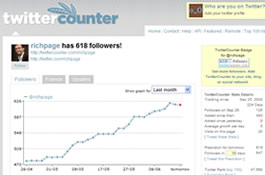 If you know how to use Twitter well, you can have some amazing success by networking you or your business on Twitter. And you can also do some serious damage to poor customer driven companies by using it to complain about things. But most people don’t really understand the benefits of Twitter because it’s hard to track results from it. But why is it so hard to track your results and success from Twitter?

Basically, unless your web visitor is clicking your Twitter link from the Twitter.com website, it won’t show up as a direct Twitter referrer in your analytics (it will simply appear as direct/bookmark traffic). Therefore if the user is visiting from a desktop application like TweetDeck, or a mobile phone app like TwitterFon, it will come in wrongly as direct/bookmark traffic instead. And unfortunately a pretty high proportion of all Twitter traffic comes from mobile or regular Twitter apps, and not from the Twitter.com website.

– Use Tracking Codes! Put tracking codes in the URLs that you use in Twitter. This is fairly easy if you use Google Analytics campaign builder– yes, I know its a pain to do so, but trust me, it will help you see the true impact of your Twitter usage, including its impact on your site goals like sales or signups. And to make it even easier, you can use this great Google Analytics Twitter hack to take out the annoying manual part of doing this.

– Use a better URL shortener! Instead of using the default Twitter URL shortener, you can use a better one like bit.ly or ow.ly – these include built in tracking codes so you can monitor clicks, and who is Twittering about the URL that you put in your link. And they show up in your analytics as their own referrer (instead of as direct traffic), no matter whether the clicker uses a Twitter application, or Twitter.com, so you can measure your Twitter usage better!

– Measure your influence! There is also a great free tool that actually gives you even better Twitter analysis – its called Twitalyzer, and lets you measure your influence, not just measuring clicks. It uses a system to calculate things like your reach, genorousity and clout in the would of Twitter. Definitely worth a look!

– Track your re-tweets! The more people who are retweeting your messages the better – so use a tool like ReTweetRank to measure the amount of retweets about you per day, and try and grow your ranking on there. You can also use it to compare your retweet rating against your competitors or peers – and beat them!

– Put your ear to the ground!  It’s really important to listen to who is talking about you to get true insight (good and bad) – TweetBeep measures the amount of times your Twitter name or product or brand is mentioned, and what is being said, and automatically emails you anytime this happens. Very useful – and remember to always reply to these people talking about you!

– Customize Omniture if you have it! Lastly, if you are lucky enough to be using Omniture Site Catalyst, you can customize the tool to automatically track top Twitter clicks, clickers, followers, and keywords mentioned about you.

So there we have it – some great tools that help you understand and track your Twitter success better. What other Twitter tracking tools do you use?

Found this article useful? Please share it on social media. Thanks! Hi I'm Rich. I am an expert website conversion optimizer with over 10 years experience

Learn how I can help you

7 unique tools to quickly boost your website sales or leads Hi. I'm Rich Page and I can quickly increase your conversion rate and sales. I've been doing this for 100s of websites over the last 10 years including Disney.com and Vodafone.com.

Found this article useful? Please share it on social media. Thanks!